What is a .YFX file?

If you used the Import/Export functionality in Yellowfin in 7.2 or earlier versions, you may have noticed that the export file is in the .XML format. Some of our power user clients would go in and edit certain fields in the .XML export file in order to make for a smoother transition between test/development and production instances.

But with the launch of 7.3+ and later versions, Yellowfin exports are now in something called a .YFX file. What the beans is this?

Basically, a .YFX file is actually a file container rather than an true file that contains data. This means that, like other file container types, the container can be opened with an archival tool like WinRAR, 7ZIP, Archive Manager, etc.

If you point an archival tool at one of these .YFX files, you will find that it contains two separate files, a .XML file, and a .JSON file. 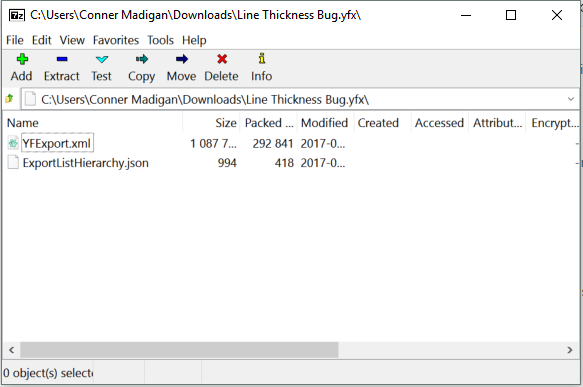 The .XML file is the same as the pre-7.3+ output, which means that if you were a user that edits the .XML while transitioning between instances, your workflow remains relatively unchanged. The only added steps are opening the .YFX archive, and then resaving the archive after changes have been made to .XML file. The .JSON file contains data necessary to support some of the new report and charting features of 7.3+.

If changing .XML files was part of your workflow prior to the .YFX files of 7.3+, we strongly advise that you do some structured testing with the method above before committing it to your new workflow.