Everything you ever wanted to know about the license / licence (no matter how you spell it) details page within Yellowfin!

This article will cover a quick overview of the licence page and parameters. If you have any licensing concerns, your first point of contact would be your CSM.
Alternatively you can raise a private ticket and one of our YF support team members will get back to you.

You can get here via Administration > Licence Details.
It will look something like this: 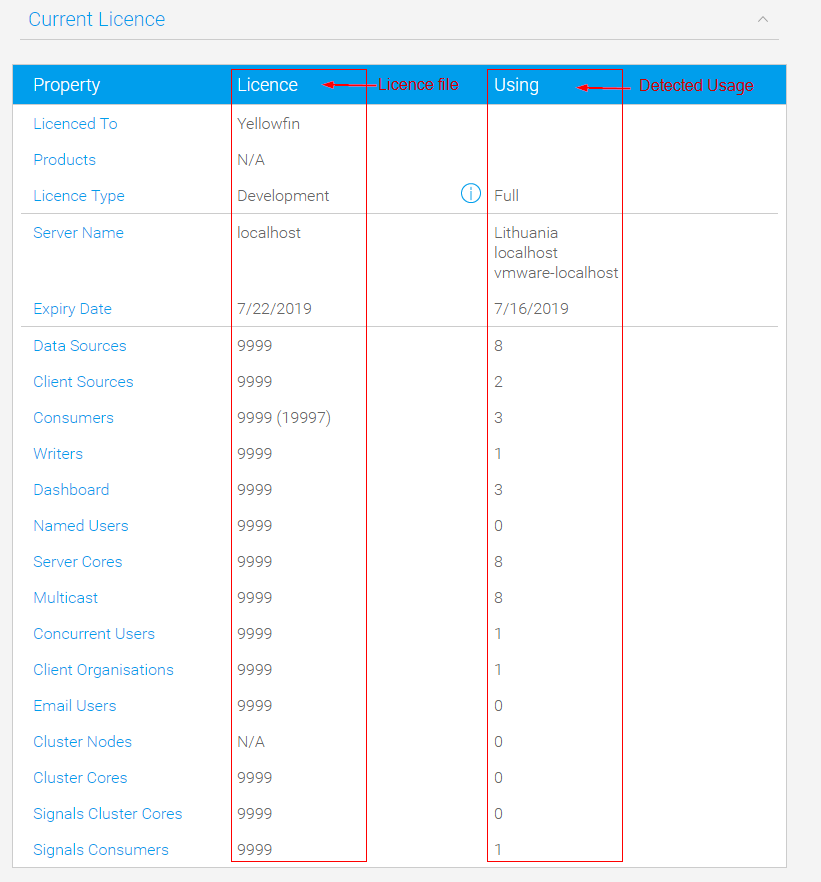 Alternatively, you can access the same details (and more) by going to the licence details box via the info.jsp page.
You will need to scroll down to the Licence Details section. 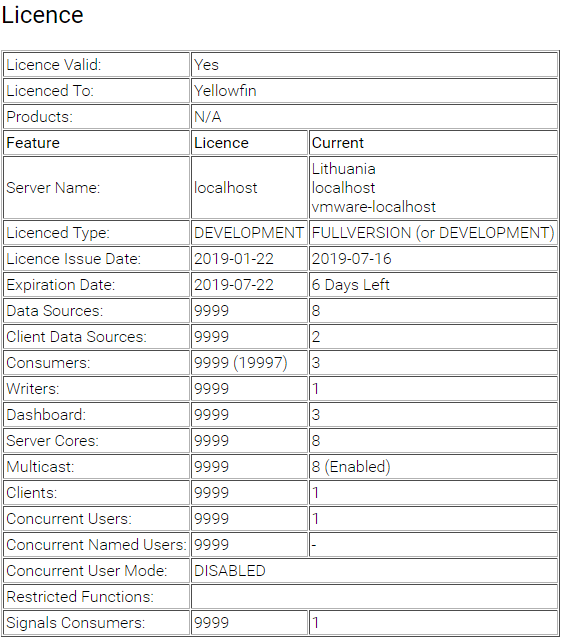 How can I find out what each property means?

You can get information for each parameter by clicking on the parameter name.

Having issues uploading a new licence

There could be a number of reasons for this, though the  most common are;

-Bad licence file: Sometimes licence files are changed when scanned by email security.
-Licence incompatibilty: This could be due to licence parameters, or simply version of Yellowfin.
-Yellowfin DB: Missing stored procedures after a DB restore.
-If you see a 'Data population failed' error, in nearly every case, this occurs when the license provided is for version 8.0.1 or later, and the Yellowfin instance is version 7.

There was a change in licence parameters that can cause this issue. To solve this is a matter of providing your YF version and a copy of the license. At which point, Support can replicate the issue then re-test on V9 for example. If it works there, the license would need to be regenerated with the older parameters, which can be handled by your CSM.

If you are facing ANY issues uploading a new licence, please reach out to either your CSM or support, and include;
Your licence file + Info.jsp along with any errors, screens you're facing.

How do I resolve 'Your licence has been breached' ?

This means that a licence parameter has been breached, e.g. Too many users, licence installed on a different machine.
In order to resolve this, we will need to identify which parameter has been breached.
Please get a copy of your info.jsp, licence file and reach out to your CSM.
Alternatively you can raise a private ticket with the requested info.

How do I upload a new licence?

You can upload a licence from the licence management page.
There is also a backdoor which can only be run locally from the Yellowfin appliceation server. See this article for more info.

Why do I have warning triangles in the licence details , though no breached message? 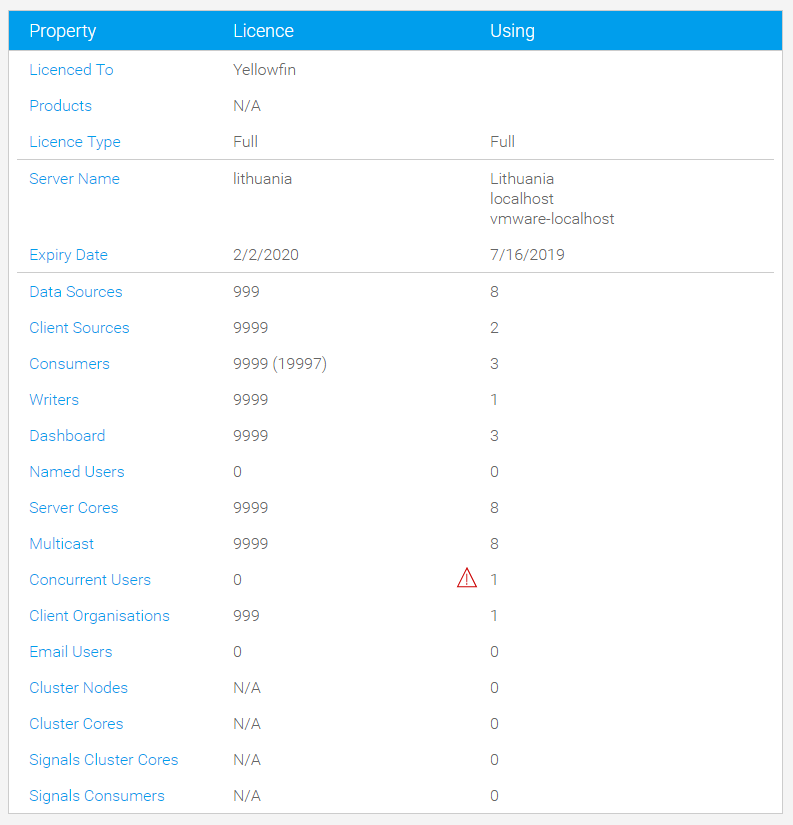 It just means you have a parameter that has been picked up, but not included in your licence.
If the licence has not been breached, there s nothing for you to worry about.

Alternately, if you're seeing a breach message but no warning triangles, you may want to open the license file itself in a text editor and make sure the Issued Date is not in the future. This can happen if, for example, you're supplied with a new license 1 day before your current licence is set to expire. If you were to upload the new licence immediately the licence wouldn't be valid until the following day.

Common areas we see this;

Why do I have a number in brackets for consumers?

Technically, in Yellowfin there are 2 types of users; readers, and writers (Dashboard users are just readers with dashboard access).
The number in the brackets is the number of consumers you can still use in your installation.

How is Consumer Role defined?

Whether a role is a Consumer Role or Writer Role is determined by the Report Access function in the role. This function has a CRUD (Create, Read, Update, Delete) modifier. If a role only has a "Read" CRUD modifier for Report Access, then that role will be a consumer role. The number of users that are assigned a consumer role, will be deducted from the Consumer count in the licence. You can have any number of roles that only have read access. You may define consumer roles that have different access to other features, for example a Consumer Role with Dashboard access, and a Consumer Role without Dashboard Access.

How is a Writer Role defined?

Roles that have anything other than the "Read" CRUD modifier for the Report Access function will be a Writer Role. The number of users assigned writer roles will be deducted from the Writer count in the licence.

If the out-of-the-box "Consumer" role, was modified to include more than "Read" on the Report Access, then that role would become a Writer Role. Once the role is saved, the number of users that have the modified role, would be deducted from the Consumer count on the Licence and added to the Writers count.

What is the difference in functionality between a full user and consumer?