I was wondering whether it is possible to set up a Quadrant Chart in Yellowfin - can't find much information online.

The data involves a top 10 gross profit and top 10 costs column, resulting in a total of 20 points on the chart. The data comes from a database that is frequently updated. The issue I'm having is that there is no way to put a 50% point unless you use predefined values (by the looks of it), which is a concern if the values keep rapidly changing.

One thing I have tried is to convert the values to a percentage of the total for that column however, there are 20 points (10 + 10 via two SQL select statements under a UNION). In a attempt to get around this, I've set the SQL in a view to have a column dedicated for containing the total but now there are two totals (one for gross profit and one for costs) due to having different companies in the top 10 depending on costs or gross profits.

The end result is that the same company may appear twice. Their costs are the same but the calculated percentage isn't. Each company has a color based on whether the record is related to the cost or gross profit. Due to this, blue = cost, orange = profit, if there are two records as the company is in the top 10 for both categories, it appears as grey.

Now it's possible to add a reference line in the chart however, it looks like you cannot set it to the 50% mark dynamically unless you convert to percentage.

Preferably, I do not want to remove the duplicate row as it would be good to have the two points overlap on the chart and show a different color to indicate that the company is in top 10 for both categories. The chart works nicely if using the raw values (in $$$, not %) however, setting the quadrant lines becomes an issue.

Any help will be appreciated.

The option for a Quadrant Chart can be achieved by using a Scatter chart and a couple of way of achieving this type of look. 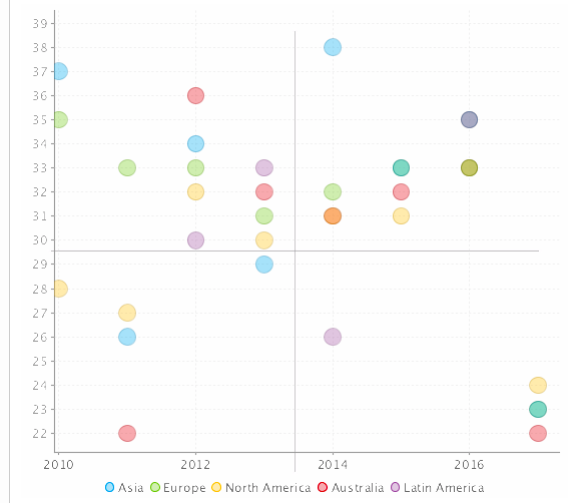 Or you can use a canvas where you can draw lines on the chart as follows. You can find more information on this here.

Please take a look at the above links and you should be able to achieve what you are looking for or at least be able to point you in the right direction of how to achieve this.

No problems. Please let me know if you need anything else or if you would like me to close this ticket off for now.

Just touching base on this ticket to see if there is anything else you need from me or if you are happy for me to close this off?

All good. The image has been set and looks great.

Thanks Jimmy. I am glad it has worked out.