How do I restore an old/deleted Dashboard?

I would like to ask if there is a way to restore an old dashboard that it has been deleted.

Thanks for reaching out with your question. The ideal recovery method would be to access a backup of your Yellowfin Configuration Database and restore that backup. That being said, I understand that often times we find ourselves without that exact option. 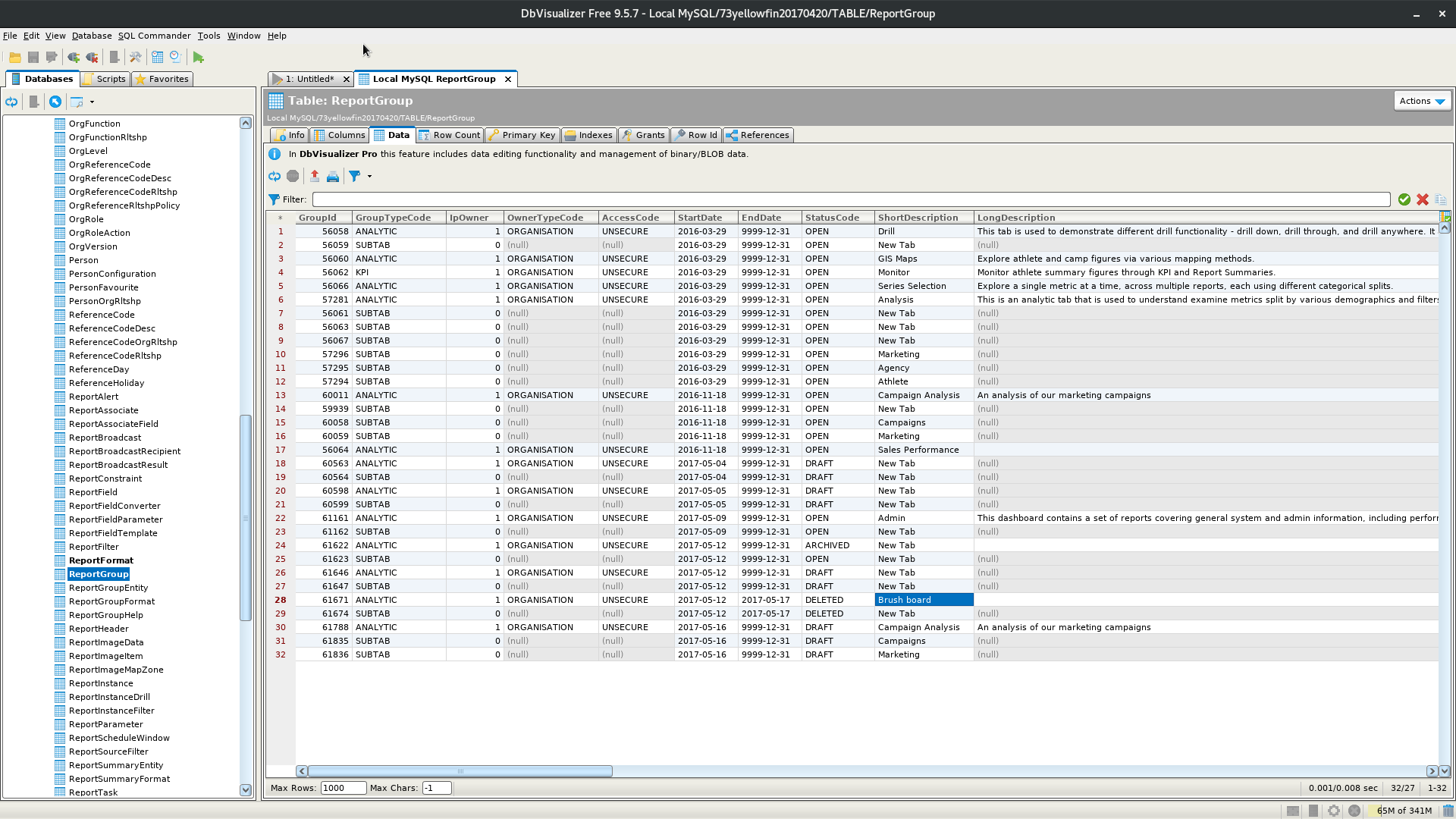 You can see my highlighted test dashboard, 'Brush board'. Of course, in a production instance this will be much harder to sort through. In order to find it quickly, we can run a SELECT query against our config db:

Of course, you can change this as needed. For example, if you don't know the exact name you may use a LIKE operator instead, or you may SELECT all dashboards WHERE StatusCode='DELETED'. The goal is to find that 'GroupId' as shown:

Now, we see here that the 'GroupId' of the dashboard I've accidentally deleted is 61671. We need this number for our UPDATE query to restore the dashboard:

It's very important that the above query is run with the GroupId, as that's the primary key of the table. This ensures that only the specified dashboard is updated.

After you've successfully run this query, you need to restart Yellowfin to pick up the changes. Your dashboard will no longer be a permanent tab in the personal dashboard of any of your users. You'll have to access it through the Browse page and add it back, or assign it through other means. The good news is, however, that your dashboard will be back!

Let me know how this goes.

thank you very much!! I could successfully restore the Dashboard as you showed me.

In that Dashboard, some reports that were used have also been deleted. I assume that if I do the same procedure for the reports I will find them again.

How can I know which there reports were? Is there any field in the DB that shows the relationship between the Dashboard and the Reports (and maybe the views of the reports)?

Thank you again and have a nice day,

Keep in mind that if your dashboard contains any subtabs, those will have their own unique "GroupId" in "ReportGroup". This is denoted by the value of "GroupTypeCode" being set equal to "SUBTAB".

You'll notice that they are both "SUBTAB" entries. Therefore, in order to determine which reports were on the parent dashboard, I would have to query for each sub tab and determine this way. Filtering "GroupId" on the value 61835 (the first subtab) will show me the reports that were part of that subtab:

Doing this for each subtab "GroupId" would essentially give me the required "EntityId" values to join back to the "ReportHeader" table to find my report names.

For a standard dashboard, you need only filter on its own "GroupId".

That being said, let's use my example above. I'm given five different "EntityId" values by filtering on said dashboard > subtab. In order to pull up the report records to determine some meaningful value, I'll query the "ReportHeader" table.

Resulting in the output of the report details, allowing me to view their names:

Note the field in the return of this query called "ReportStatusCode". If a report has been deleted, the value of this should be 'DELETED'. To restore the report, you can simply run an UPDATE query to change this to 'OPEN' and restart Yellowfin. When doing so, reference the reports directly by their "ReportId" to avoid mistaken updates.

Give this a try and let me know how everything goes.

thank you very much for the detailed info!

I could successfully find the reports used in a Dashboard which is really helpful for the existing Dashboards as well!!! :D

Thanks for the update. I'm glad you were able to come to a resolution. I'll go ahead and mark this as Answered, however if you have any further questions or issues don't hesitate to contact us.